THE BEGINNING OF THE PROMISED CITY 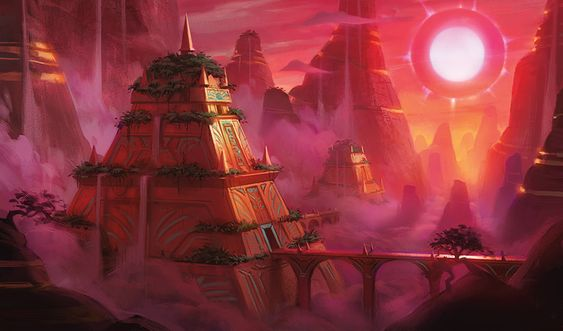 “With the heralding of an end of ages, dawn lights a new path driven by the Gods to the Grand Salvation.”​
Ruination bestowed upon us by the abyss of the beyond, disaster which our people have succumbed to slow crumbling for centuries. We are the generation which will put an end to the cycle of damnation that has plagued us. The Gods have called to us, start a new path, a new journey, and so we have answered. The City of Nex that has been home to our people for centuries has been left in a state beyond repair, unlivable after the culling of Vemana’s hordes alongside that of our Enari friends. Our survival was dependent on those of Enarion fighting by our side, and for that we are grateful. ​
Hope remains amongst our kin, the Valley of the Five Temples remains as a pinnacle of the Nahueti’s followers as a place which shamans have gone for centuries in order to learn and study under their gaze. Where rituals and rites have been uncovered, trials have been done. A place that has fallen to disrepair as our attention shifted towards saving our people, rather than progressing it. This age of stagnation shall be no more, the blessed valley shall undergo a transformation into the Promised City, for a new age promising of peace and prosperity is not just upon us, but the entirety of Zhul. It is our duty that we keep our promise of allowing peace and prosperity to reign as we return to our once great era. For this is only the beginning of the time of revival...​

Penned and Signed,
Yoliliztli of Iyelitzin
High Priestess of Nex​

“Yeah!”
Thyil cheered, the thought of restoring the valley made him smile :)​
You must log in or register to reply here.
Share:
Link

Archimedes_B)
Just did a retest in history and raise their grade from 50% to 70%, feeling good!
Yesterday at 6:31 PM 1 replies

Sukitoru
you will never get to hear an orc drum solo
Yesterday at 5:47 PM 3 replies