How well do you know the existing server lore? I know the current lore to it's fullest extent. I keep up to date with the bestiaries and player lore, and read most of the submitted lore, even the lore that gets denied. I'm aware of the magic system, however, it's still somewhat hidden from me. I believe I understand the basic elements of the runes and tattoos, but I've been keeping myself away from magic somewhat as my characters aren't interested in becoming a mage anytime soon. I've read through the tales of Enarion's timeline several times when I was going to make a librarian character, before Ordheim shut down. I've also kept up-to-date with several of the creation stories of the nations, like Innse Brenna, Holy Flame, and Vlachia's unique declarations of statehood.

Why do you want to join the team? What kind of lore do you want to write about? I want to help the team as I want to help the server. I care deeply for this server, and want to see it become larger and more lively each day. I believe the event and mechanical side of the server are both incredibly well-polished, with Rumpo's excellent coding and our large ET staff. I believe the one department that needs the most attention is the Lore team. I've invited a fair amount of experienced roleplayers from chatrooms I've been in, and only a few have come, wanting more lore and more outlets of the in-world universe to explore- more conflict, more races, more ideas, more creatures, magic, et cetera.

I really want to see the lore team get more done, and I believe more lore team members and different perspectives from different worldbuilders will create a cohesive narrative with something everyone can enjoy. Now, the lore I want to write about, truth be told, is new and different races. I've had experience writing species lore, and have recently written birdfolk for another server. Ignoring the harpy gf meme, I really do think different races and species generates unique character ideas and interesting roleplay. While this may seem controversial, racism roleplay can be used to generate conflict, which gets people online, talking, and generating more roleplay. On a certain redacted server, orcs were used to generate in-roleplay conflict similar to the role Ordheim played now, but on a much more frequent scale. This is the potential different races have for conflict.
On top of this, new races allow players to express their creativity much more. Playing an Tiefling or Orc- races with rather unique attributes- may be far more appealing to certain players when compared to playing as either tall human, small human, or human human. When I invite amazing roleplayers to the server, several of them just look at the three and go "Ah, can I play as a goblin? A tiefling? A beastfolk? Azdrazi?" I say no, and they're not willing to try the server, seeing the lore as 'too limited', and refuse to give FRP an app. I believe with a few more races, the player count could drastically increase, as players see the new options, and are willing to give this great server a chance.
I believe that I should mention this now, while I'm writing the application, but one of the reasons people don't agree with the concept of new races is because they believe it can thinly spread roleplay, and I am definitely against roleplay being spread farther and farther across the map. People believe that new races may equal new nations, and new nations mean that roleplayers aren't in other town squares. However, new races don't actually create new nations. The driving force behind modern nations are solely metacliques. A metaclique is a group of people who are friends OOC, so they help each other IC. While this is usually fine within a closed setting like a town, on a nationwide scale it can cause some issues.
Groups of people will create brand-new characters, usually some sort of noble family, all at once, and create a new nation at the exact same time. There is no pre-determined roleplay, no war of independence, just a new nation popping out of absolutely nowhere, along with an entire family worth of people. We have already seen this take place several times. The nation I live in, Order of the Holy Flame, exists solely because our metaclique wanted to create a new nation out of thin air and call it Norland 2 for the fun of it. Vlachia was a group of OOC friends who already had a castle and wanted to hate elves and create conflict. There are probably more examples, but I don't wish to slander any nations I'm less informed about. The point is, new nations are not created because of new races, but because a bunch of OOC buddies want to create a death fortress together. This could be controlled not by preventing new races, or even new cultures, but by simply denying new nations unless they've prepared a proper amount of RP to back their claim to the throne. Not just a document declaring a new nation with some backstory, but a in-roleplay conflict between groups of people- like Barwic, which was created from a group of westholm peasants moving east in-roleplay, Veritas, which was formed through a secession crisis and a war, Mjolheim and Nordavik, forged by the ruins of Veritas and Ordheim coming together and making an alliance. Nations like these are the ones that should be encouraged by the staff, nations forged through interesting roleplay, not a bunch of butt-buddies. If this doctrine is followed, I fully believe that new races creating new nations will either be nonexistent or not a problem, due to the amount of roleplay generated.

Alongside developing new races, I'd also like to develop new location lore. I have written lore in the past for biomes, ruins, and cities before, back on old, text-based roleplay sites where builds didn't exist.

What interests you about fantasy settings in general? What interests me about fantasy settings is the freedom to explore a new world and create interesting concepts not readily available in a modern setting. I love creating and exploring a world vastly different from our owns, something to escape into, as opposed to modern, which too closely mimics real life. I love being a unique character that isn't just a human at a school, or a guy on a bus- but something more exotic, like an oath-bearing warrior, a mad wizard, a sly merchant, things that don't exist in real life. I like to play characters that feel like they matter, and I believe the limitless potential of a Fantasy setting allows for that to happen far more easily.

Do you have any prior experience with writing lore? Please provide examples if you can. I have written lore many times in the past. I used to write for a few group roleplay chats on an old chatroom website; However, all of their wikis have long since shut down and all of the articles have been nuked in the aftermath, so I can regrettably not show them. They included a few race and important figure bios, along with a taiga biome, the mountain ranges, and a village.

I also recently wrote Owlfolk for Lost Fables, another server. They asked me to write owlfolk for them and a few other players on the server, so I did. 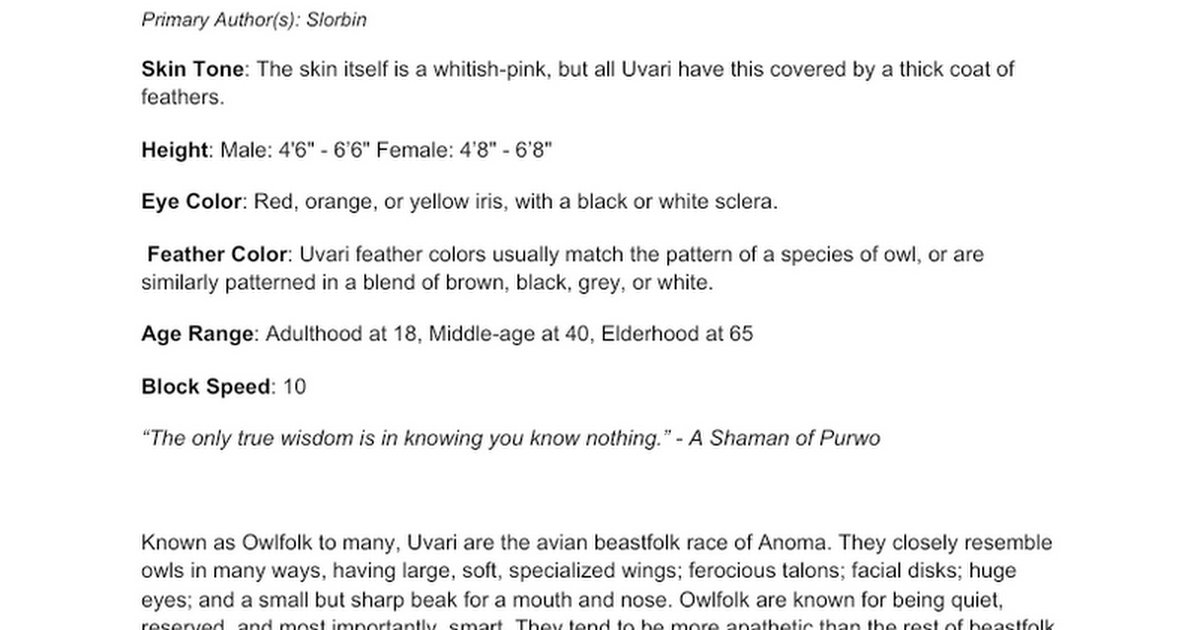 Art goes here, to be inserted into the Wiki. https://wiki.lostfables.net/index.php/Owlfolk Wiki page done, redirect here. Primary Author(s): Slorbin Skin Tone: The skin itself is a whitish-pink, but all Uvari have this covered by a thick coat of feathers. Height: Male: 4'6" - 6’6" Female: 4’8" ...

docs.google.com
I understand that this is only one document, but most of my lore has been lost, since I didn't use google docs at the time. I'll write more examples if requested, I'm currently writing lore for another fantasy-based roleplay chat.

I hope you consider me!
P

I’ve noticed that, as I wrote this post, they reviewed the lore team applications and accepted a few people. Despite this. I still wish to apply for lore team, so I’m keeping this up.

I also want people to see this so I can officially say this is my 'harpy gf manifesto'
Last edited: Oct 17, 2020

_Tepes
Please buy the Mithril for Lion. She needs it
Yesterday at 3:53 AM •••