(All inventory images made by me)
(Some images taken from other servers as inspiration)​
Table of Concepts:
* Heads
* Soulbinding
* Satchels
* Bolas
* Rideable Mounts
* Drugs
* Auto Fishing
* Language Identifiers


Heads​
............Like me, you like to use heads when building or decorating. It adds a nice touch, right? Currently, you need staff assistance to procure a simple, decorative head. What if staff isn’t around or doesn’t want to waste their time fetching a simple head? 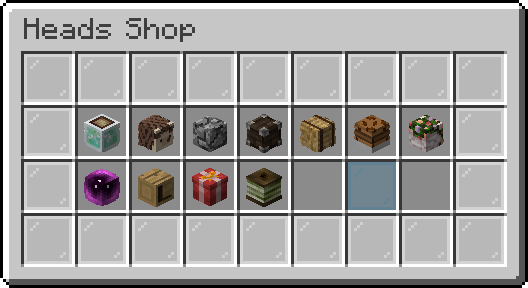 ​
............My first suggestion is a catalog of staff-approved heads that are accurate with the server’s setting and lore. It allows players to dump silver into getting decorative heads, which helps the flow of the economy. Plus, a heads shop allows silver always to have value.

............In this concept image, there are eleven categories of heads (left to right):
............The “Blue Glass” item at the end, once clicked, could link the player to a google form where they can request a new head to be a permanent addition to the growing catalog. They would have to provide either a quality head they made themselves or insert a link from a heads repository. If a player wishes to request a custom head for themselves and not for the catalog, they should be able to:
or

............No matter which of the two methods they use to procure their custom head, it would be sent to a menu to be approved by staff. This way, players do not have to bother staff for most of their head-reqs. Players would be able to contribute to the catalog in an orderly manner or be able to request a custom head. The staff would still be able to curate and control which heads are allowed into the server. Finally, it gives the player base another outlet for their silver.

​
............Now, we wouldn’t want people to be randomly soulbinding things to their inventory. I propose that only items are given the tag “Roleplay Item”, or whatever you want it to say as the image is only a concept, can be soulbound to your inventory. This flag prevents players from soulbinding their horse tags, PVP gear, or other non-roleplay items. If you wanted to enforce which items are allowed to be soulbound, Event Staff could be in charge of handing out a unique token that enables the player to soulbind their chosen item. The Event Staff can curate and approve what thing gets to be bound. This flag would also prevent the said item from being transferred to any chests (barrels, enderchests, etc.) and would have to remain on the persona until circumstances dictate otherwise.

Satchels​
............Have you ever wanted to have a neat way of bundling stuff from the resource pits? Maybe you want to create roleplay sacks for medical roleplay. Why not have something like a backpack but with a better name to fit the server? 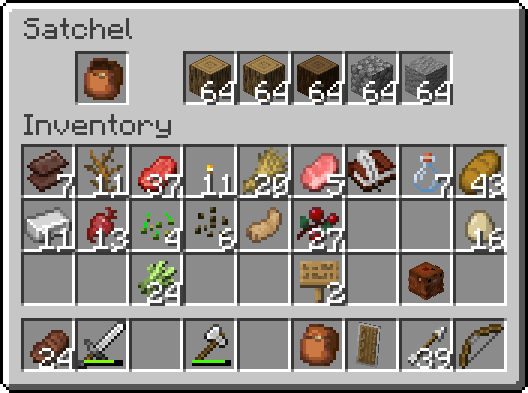 ............You can store your loot from resource island and easily dump it onto your receiving party with satchels. It can hold up to 5 slots of items, though this is only a conceptual amount, which staff can change to whatever number they feel is more suited. Satchels would be unable to be soulbound since that seems like it’s cheesing the system. This concept would be an alternative to shulker boxes while allowing it to seem fitting with the server’s setting. A player may choose to put medical roleplay items in the satchel instead and could sell it as a travel pack for doctors or as a portable first-aid kit. It would be craftable on the anvil as a miscellaneous item. The possibilities are endless; however, it would be nice if satchels could be dyed as other leather items can. You could be able to remove this plugin once Minecraft implements Bundle; however, in the meantime, this plugin exists.

Bolas​
............Is PVP boring? Is it the same old, same old, click, strafe, and flank? Do you want a new mechanic that could spice up your battle? Bolas is an old-fashioned weapon used to tangle up a target’s legs, to trip them up or slow them down. They are simply described as “balls attached to a rope” and would prove to add something new to PVP. 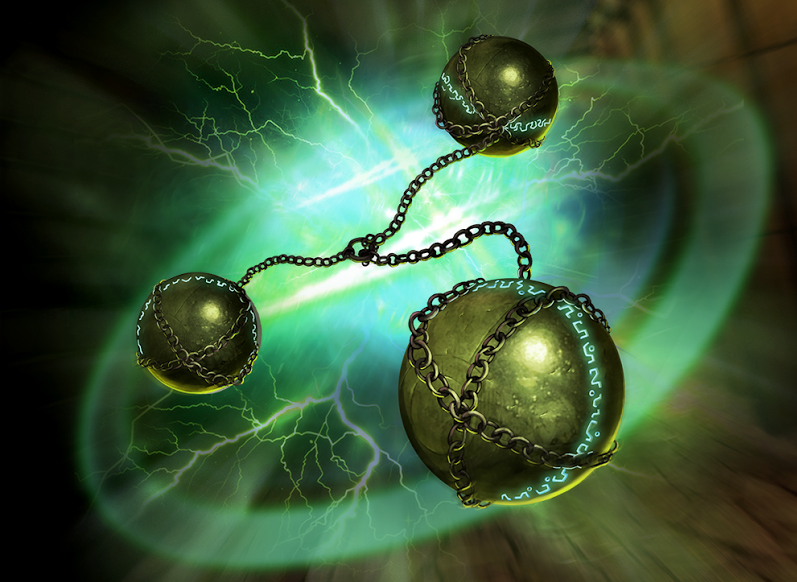 ............When a bola successfully impacts a player’s hitbox, it has a chance of slowing them down for a few seconds. A bolas would be a throwable, like a snowball or a trident, as it would not be launched from a crossbow. It would not damage a player, only somewhat impede their mobility. Staff could choose to implement optional enhancements such as increasing slowness. Every new PVP mechanic needs to be balanced to prevent abuse and unfair advantages in PVP. To balance it, bolas could be a single-use item (like arrows), or there could be a cooldown on throwing bolas (or how often a player can get bola’d during PVP) and be blocked by shields. I understand that many connoisseurs of PvP may not like their precious combat system touched, but it’s already been touched many times. Why not add something new for them to learn and be cool at? It’s time to make something fresh.

Rideable Mounts​
............I’ve only ever seen players ride horses, but why not throw a little bit of fun into the mixture? Imagine if we could ride polar bears or goats when the server updates? This concept could allow races to choose the creature that is more akin to what they would ride within their community. For example, dwarves could ride polar bears due to their snowy climate. Halflings could ride a goat, or a pig, due to their small stature. To take it even further, one could color the polar bear into an average bear (as a random entity), allowing for yet another type of rideable mob that the elves might use. Rideable mounts could also be extended to pandas, as they will also come in the newer update. 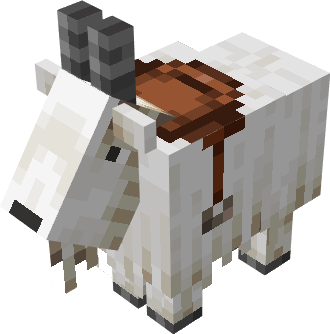 ............Perhaps, it would be possible to allow these rideable creatures to have the same random stats as horses once tamed; that way, they would not unbalance PVP by going their default speed. If not, that’s fine; I just think it would be neat to be able to ride something other than a horse or a griffin for once. Otherwise, most of the mobs would just be aesthetically useless. I wouldn’t go as far as mounting the turtles, though.


DRUGS​
............Who doesn't love doing DRUGS on my Christian roleplay server?! There are currently no servers with a working drugs plugin, whether it's a bong, hookah, or weed itself. Wouldn't you love to pound down on a stack of drugs and pay the in-game consequences? Imagine the cool, silly, or even scary visual effects one could get from doing many rows.

An example of an old effect from 2016 from another server.​
............But one could do more. What if doing too much of a drug causes blindness, and the player imagines angry spiders or endermen? It could even be a warden in the new update! What if taking too much of a drug causes the player to be swarmed by an encircling swarm of parrots and bobbleheads? Just imagine having the trippiest consequences from too many drugs. The effects don't only have to be visual. It could cause the player to get rotten hunger or slowness effect. This could open up another outlet of roleplay by allowing players to deal drugs or create another outlet for silver, as I’m sure no one is buying drugs for free. They could be created under the brewing stand model unless the staff has any other ideas. Perhaps to make it simpler, it could be just an addition to the current pipes. (imagine using rotten potatoes as the replacement item for weed). If you need any references or inspiration, there’s always this plugin.

Auto Fishing​
............Last time I checked, players were allowed to use auto-fishing mods on FRP, but they were not allowed to be AFK while using it. Who wants to go through the hoops of downloading a mod? Maybe a user’s computer can’t handle mods, so why not use a ready-made plugin that allows modless auto-fishing! This would easily allow people to auto-fish, and the staff could probably make a timer. That way, people can’t go AFK and leave their game.

............The plugin can be found here and is hopefully easy to implement. I know mods can be taxing on people’s computers, and finding an excellent auto-fishing mod can be difficult nowadays. Another idea would be to allow VIP ranks to use /autofish, while all non-playing players would have to download a mod; thus, another incentive for buying VIP.

Language Identifiers​
............In Enarion, there are many different languages, all of which can be learned. Until then, they are indistinguishable by the players. My problem only arises upon gaining 100% fluency in a chosen language. Unless you hover over the dialogue with your mouse, you’ll never know if they are speaking your learned language, your native language, or common. This can also be a problem if you forget that you are currently in another language or if you responded to someone who was speaking Elven. Yet you wanted to hide the fact that you could understand Elven; whoops, now people know OOCly that you can understand Elven, which could influence their roleplay from that point on.

............Perhaps if there were an immediately visible indicator in the chatbox that someone spoke a language other than common, this would save people from these common mistakes. It could be something simple... Like [E], [D], [H], [V], [T] at the beginning of an emote before the character name, whatever you feel like would work.

My opinion is the only right opinion and i say yes!

IncognitoOtter
End of the Internet
Yesterday at 10:02 AM 0 replies

SinisterWeee
e
Saturday at 1:19 AM 1 replies

Sukitoru
the magic convocation was an elden ring reference
Saturday at 12:55 AM 1 replies

Nyomi_Wood
preparing for art fight, open to trades or gold comms for a bit :thumbs_up:
Friday at 3:00 PM 0 replies

Pinks__
can we get another tourney pls :begging:
Friday at 12:27 PM 2 replies
S
SammsClub
Looking for someone to play my nephew. his name is aspen bear parks and he is roselia park's child. DM samm<3#5904 for details and skin
Thursday at 6:20 PM 2 replies