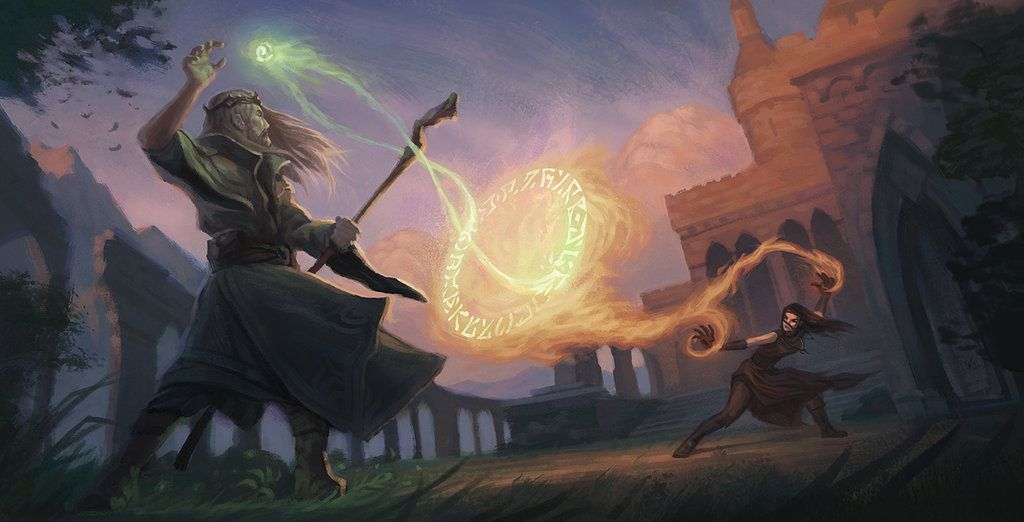 Runemagic, also known as Wizardry, is an advanced form of magic that utilizes magic gems, magic foci, and the drawing of runes to cast spells. Unlike Crystal Sorcerers, who use their own vitality as a power source for their spells, Runemages draw magical power from the magic gems they imbue at runestones, and use the runes themselves to shape and control that power.​
At the center of Runemagic is the magic focus. A magic focus is a specialized item that a Runemage uses to cast spells. This is often a staff, but it can also take the form of a wand, spellbook, ring, or other item. Not everyone can use a magic focus, however. Runemages must first undergo a special ritual to attune themselves to the flows of magic in order to command their focus.​
Two ingredients are necessary for creating a magic focus. The first ingredient is a specialized gemstone, inscribed with a rune and filled with magical power from the appropriate runestone. Casting spells will slowly drain the magic from the gemstone, and it will periodically need to be replaced. The second ingredient for a magic focus is a magical conduit to connect the magic gem to the Runemage using it. In a staff, this may consist of inlaying the conduit material into the wood of the staff so that the magic may flow from the mage’s hand to the magic gemstone at the tip. In a ring, this may consist of selecting a magical material for the band. Only certain materials are suitable for the magical conduit, such as gold, mithril, or aetherium. Higher quality and more magical conduits will increase the efficiency of the focus and therefore extend the lifespan of the magic gem. Note that using a bare gemstone with no conduit will not work, hence the need for a magic focus.​
Once equipped with a magic focus, a Runemage is prepared to cast spells. This is done through the drawing of runes in the air with the magic focus. In order to successfully cast, the Runemage must mentally activate their magic focus, concentrate solely on the spell they are casting, draw the correct runes for the spell in the air with their focus, and then will its effects into being. While casting the spell, the gemstone in the magic focus will glow brightly, and it will leave a magical glowing trail as it traces runes through the air. Once the correct set of runes have been drawn, the Runemage wills the spell's effects into being and casts the spell.​
Every spell has a unique combination of runes that must be drawn in order to cast it. Drawing the wrong set of runes for the spell being cast will lead to the spell fizzling and failing to cast. In addition, spells can only be cast by magic foci from the appropriate spell school. There are nine spell schools, one for each rune, and the spell school of a magic foci is determined by the type of gemstone used to power it. A Runemage can only cast spells while holding a single magic focus, as otherwise the magical flows of the foci would interfere with each other and cancel each other out. Therefore, while a Runemage can learn spells from many spell schools, at any given time they will be restricted to the use of one. Proper preparation to determine which magic focus to bring along on a quest is essential.​
There is one severe drawback to Runemagic, however. Runemages are unable to use their abilities and cast spells if they are wearing any item made of iron. Iron is a particularly mundane material that severely inhibits the flow of magic, so much so that even a simple pair of iron shackles completely disables a Runemage’s ability to command their magic focus. Therefore, Runemages find themselves unprotected by armor while in combat. Iron items, such as a sword, are still able to be wielded, they just cannot be worn.​
—

Runemagic is obtained through the successful completion of a ritual, much in the same way as Crystal Sorcery. However, the ritual is more complicated and requires a thorough knowledge and understanding of all the runes as well as magical theory in general. Anyone that wishes to attempt the Runemagic attunement ritual should contact a member of the Lore Team to schedule a magic interaction. Refer to the Runic Interactions thread for a list of approved LT.​
—

Runemagic, although given the potential to surpass Crystal Sorcery in terms of power, is also a field of strenuous study. Unlike Crystal Sorcerers, who immediately unlock an arsenal of spells upon attunement, Runemages must research and learn each spell separately. Spell research can be attempted by scheduling an interaction with an approved LT. (This type of interaction may be done through discord DMs).​
Rules regarding spell research:
—
Redlines & Rules for Runemagic
Schools of Rune Magic
Aeromancy (Air) | Mysticism (Astral) | Arcana (Balance) | Necromancy (Death) | Geomancy (Earth) | Pyromancy (Fire) | Invocation (Life) | Thaumaturgy (Temporal) | Hydromancy (Water)