“Expel the Brennans from the North!” Tsarina Katerina Dragic

The Rosbroch Massacre refers to the routing of defensive Brennan forces by Fyrmána and accompanying mercenary bands, commanded by the Tsarina Katerina Dragic.

Upon the defeat of the Brennan forces at the Battle of Krakend on 2nd of Earthshine, 20 AC, the Fyrmáni forces quickly assembled their armies in preparation of war. Led by Fyrmáni general, Victor Baelor, the Tsarina, Katerina Dragic, and two mercenary bands, The Stormbranded and the Black Guard, their armies engaged with those of Innse Brenna within the village of Rosbroch. The battle marked the second conflict in the Fyrmáni-Brennan War and is noted to be one of the greatest offensive battles in history.

At the 10th hour after sunrise, Brennan reconnaissance forces hastily returned from the outskirts of Fyrmána back to Innse Brenna, warning of an impending invasionary force. Within moments, Brennan and Foam Island Company soldiers garrisoned in Rosbroch prepared themselves for battle by constructing makeshift palisades as defensive barriers. Their 2,300 strong force were led by Aodhan Iomharach, Cinead Ualladae and two Foam Island Company officers, Ulfric and Hendrickson.

At the 11th hour, detachments of the Fyrmáni army appeared on top the eastern mountains. Barreling down the side, a bombardment of ill-placed Brennan arrows soared above them. As the Fyrmáni forces approached the eastern wall, both supplementary units of the Stormbranded and Black Guard Company diverted their course - breaching the northern wall and shattering the unity of the Brennan defenders.

With the northern wall having fallen, the Brennan defenders retreated deeper into the villager, establishing a final hold within a watch tower. Within 10 minutes of the initial clash, Rosbroch was littered with the corpses of Brennan and Foam Island Company soldiers, and was successfully besieged by the Tsardom of Fyrmána.

While Innse Brenna suffered devastating casualties and had their remaining units flee from the field, Fyrmána suffered minimal damage. The one-sided battle was coined as the Rosbroch Massacre due to the speed and ferocity the invading Fyrmáni forces swept through the village - leaving little to no survivors and claiming a prisoner of war. Fyrmáni, Black Guard and the Stormbranded soldiers arrive to the outskirts of the village of Rosbroch, assuming a protected flank formation 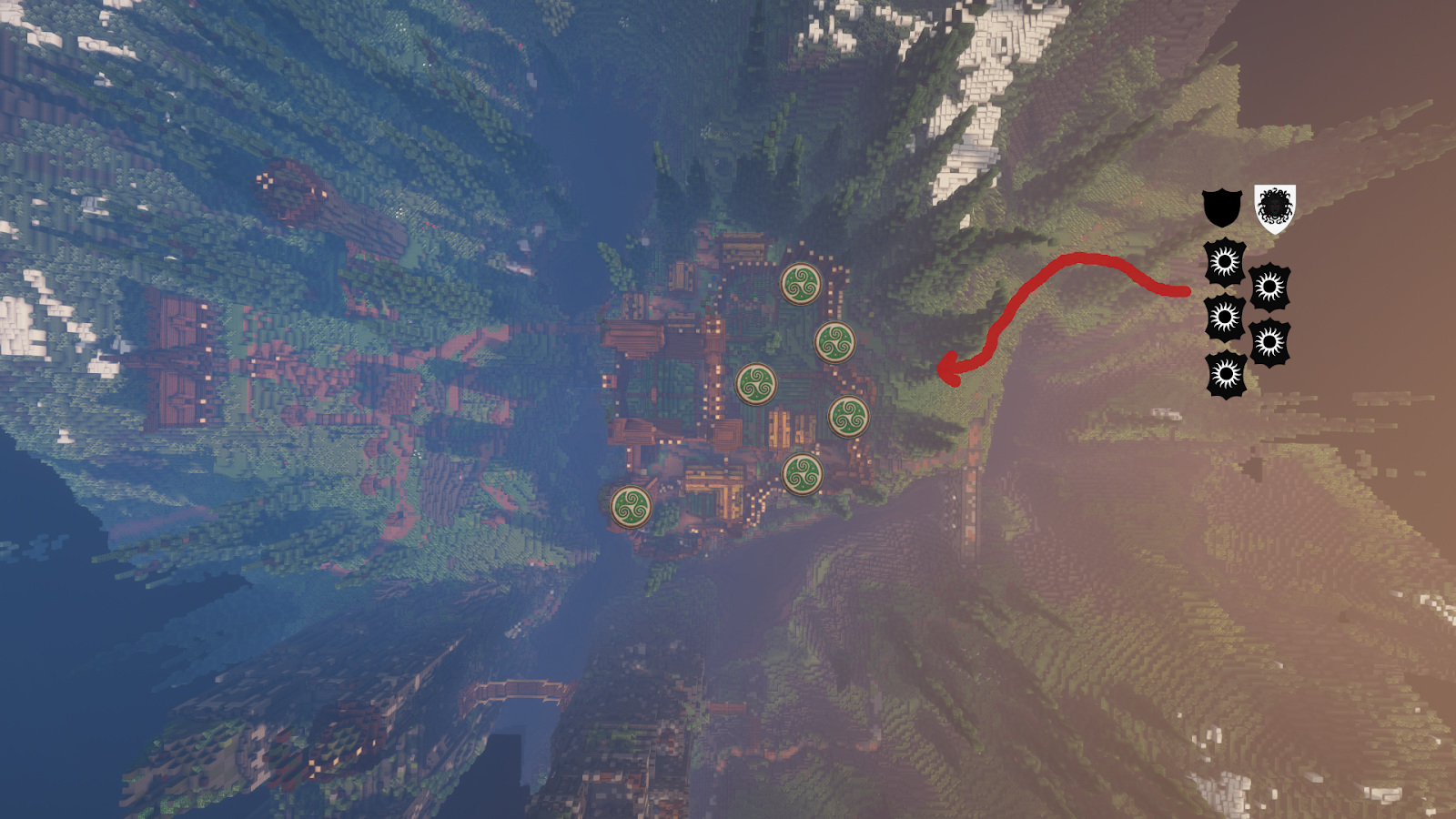 Fyrmáni, Black Guard and the Stormbranded begin their offensive, moving at a steady pace towards the eastern wall Both the Black Guard and Stormbranded mercenaries break away from the formations, maneuvering towards the northern wall As Brennan forces look onwards towards the flanking forces, a sound charge is signaled by the main Fyrmáni camp - forcing the defenders to fixate their attention on the main forces The northern garrison is unable to withstand the combine force of the Stormbranded and Black Guard, quickly falling to their advances. A reserve unit quickly intercepts them, preventing a full encirclement A Fyrmáni detachment, led by General Victor Baelor, breach the eastern wall and subdue the centre-most garrison. They would soon be followed by a wave of Fyrmáni soldiers, wedging between the south-east and northern units. Quickly eliminating the north units, the southern unit quickly retreats deeper into the village, hoping to reunite with the command camp. The reserve units eventually give out, overwhelmed by the two mercenary companies. Eventually, the two remaining Brennan units clash against the Fyrmáni, Black Guard and the Stormbranded forces - holding their post for a few moments Beaten, battered, and outnumbered, the remaining Brennan soldiers leap off their own walls, fleeing the village

Jorvic Skarfsson bows his head in honour of the fallen brothers and sisters of the battle. He had not shown to the battle himself, having fled to the caverns of Ordheim in surrender.
"Rest easy in Valhalla...Ave Brenna."
B

"Delenda est Brenna" will def be put on a banner

Asya Casimirovna Áshildr stands atop the hill, looking down at the smoking remains of Rosbroch. "Ochte prest, ak Devanika," she prays softly, clutching her staff. "Guide these souls into your keeping and bring them to the afterlife in the stars. Accept them within your grace, as they are still children of your keeping, and siblings in spirit. Stay your hand with mercy and kindness in death, as we could not in life. To your everlasting mercy. Akmat." She looks up at the sky, raising her hand towards the moon, before climbing down the hill to the trek back to Nyrodal.

Smoke could be seen rising over the horizon from the Reclamation Site, a tired Dwarf would begin making the short walk towards the Village of Rosbroch, the smell of death was the first thing to hit him, a vile smell, one overpoweringly so. After stopping for a moment, bracing himself for the coming sight of horror he would continue, upon cresting the hill and seeing the full carnage of the mascara below his breath would escape him in a wordless cry.

He would stare in grief and horror for what would feel like an eternity wondering to himself how many innocents had been butchered here. "The demons that would call this just" his words would come out but a whisper as she shook his head "May the Silver Maiden guide their souls back to us.. and may the Pit grant those who cannot find their way back the mercy their butchers lacked" he would stay awhile longer taking in the horrific sight, making sure it would be one he never forgot.

Torvin taking a break forging the ores he mined into armor, saw smoke rising over Rosbrooch, sore dwarf rushed through the small path toward the brennan town... and saw corpses and fire... Torvin shocked to a standstill dared not approach or enter the burning city. The stench of death filled the air; the smelled reminded the Soot covered dwarf of the attacked on the undead at ordheim... "t'is war is for naught, h'w many inn'cen's died? W'y did the war start? Ay'm all for war for ta rig't reas'ns and agai's' the rig't people... an' t'ose co'di'ions ne'er 'appen...." The dwarf continue to stare at the site... wondering if the same fate may befall his kin at the reclaimation site. "Me an' ma kin mus' Pre'are... or ta sam' fat' s'all be'all us as w'll" The dwarf then runs off the reclaimation site to prepare his cousins.
Last edited: Nov 28, 2020

"Thanks to Katerina Dragic and her murderers, there are no spoils of war this time, and our poor children will have to eat porridge, when they could have dined lavishly if we were victorious." commented Darius, Chairman of Foam Island Mercenary Co. and an operative at Foam Island Charity Orphanage, his heart broken, praying for those that were left on the battlefield, mostly the lost riches and weapons in his mind though.

NecroDot said:
"Thanks to Katerina Dragic and her murderers, there are no spoils of war this time, and our poor children will have to eat porridge, when they could have dined lavishly if we were victorious." commented Darius, Chairman of Foam Island Mercenary Co. and an operative at Foam Island Charity Orphanage, his heart broken, praying for those that were left on the battlefield, mostly the lost riches and weapons in his mind though.
Click to expand...

Cinead rested a hand upon his gut whilst blood-soaked from under his leather armor "We will continue to defend until our lives are gone.

Viggo Jonsson-Hartmann reads a report from Victor Baelor regarding the raid on Rosbroch. As he reaches the end of the report, he feels a sense of mourning for the dead. He leans back in his chair, looking around the room as if to assure himself that he was truly alone. "I mourn for the losses of this war," mutters the marshal, closing his eyes. "Many children have already been left parentless, and for that, I can't help but feel a sense of sorrow." He lets out a heavy sigh.

"But how can Innse Brenna not expect retribution for their actions on us not so long ago... If we had not defended ourselves during the Battle of Krakend, what would have happened to our people, our children? Though what had happened in Rosbroch will not be forgotten, Innse Brenna can not act as though they are the helpless victim of this bloody war. They declared this war, started this conflict, and as long as they continue to fight, they dig nothing but their own graves. We fight until they acknowledge defeat and cease hostilities, but... by Valyria, I can only hope that they grow as tired of this war as I am. This wanton murder and chaos does no good to any of us." He sighs before putting the report down on a stack of papers that littered his desk.

"I think that is enough work for today." He stands from his desk, leaving his small office. Perhaps the sunlight and fresh air could dim the haunting thoughts of death and massacre from his mind. ​
You must log in or register to reply here.
Share:
Link

4CD Lionfiles 4CD wrote on Lionfiles's profile.
shouldnt u have the nation leader role on the forums....
Yesterday at 9:09 PM •••