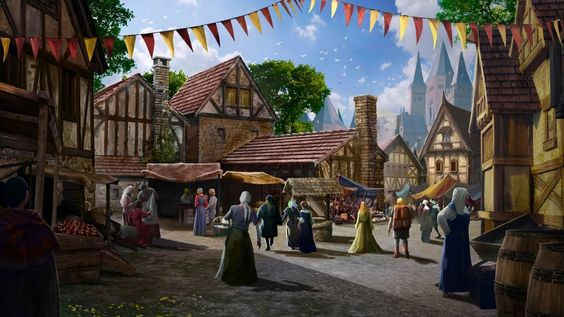 The Kingdom of Westholm flourishes with incoming commerce and businesses, all which are constantly looking for new avenues of work. Whether it be you are new to Westholm and looking for pay or a longtime citizen looking for a new career, there is something for every walk of life within the walls. The following listings are looking for new employees at their establishments.

ROYAL ARMY OF WESTHOLM
“The Royal Army of Westholm is the central pillar of military might in the human realm. It is the first organised human army formed by King Eadwine in the beginning years of reclamation. As a process of its institution it has turned the human realm into a formidable fighting force which has seen few defeats and has been dominant on the battlefield. At first an army solely of wiccan peoples, it has come to be the home for professional soldiers of all cultures such as the nornmen, nordyr and even the lost vlachian people. The pay ranges from twenty silver all the way to eightY silver per year depending on rank.”
Seek out the Lord Marshall or an Officer to join the army today!
​
(OOC: Officers and Marshall have the rank in the Westholm discord.)
https://www.fantasyrp.net/forums/threads/royal-army-of-westholm.2823/

A CALL FOR ROYAL SERVANTS
“The royal court has a need of men and women who possess a wide and ranged set of talents - whether they be skilled in many or experts in one. Any who have skill in serving a domestic households - be they cooks, chamberlain, butlers, waiters, pot washers, porters, haulers - are invited to the Kingdom’s court to present themselves and receive a proper recompense in return for their labour and in recognition of their services beneath the King.”
Seek out Tasia de Blackford for a position in the Royal Household.
​
(OOC: Message Cubicitas for more information!)
https://www.fantasyrp.net/forums/threads/a-call-for-royal-servants.2514/

THE FAITH OF THE FIVE
“The Temple of the Five Divines is home to those that embrace the faith, those that take up the mantle of sharing the Gods’ embrace, those that follow the Lording Sun in all of his divine light. It is the job of the clergy to shepherd those who have been led astray by darkness back into the light of the divine. Clerics and Seers alike seek out this position in order to ensure that the faithful do not stray. The clergy shares the truths of eternity and inoculates those who are learning the way.”
Seek out Jerom or Tasia de Blackford for a position in the clergy.
​
(OOC: To request to be apart of the clergy, please message either Jentos or Cubicitas ig or on Discord (Jentos#6646, Cubicitas#0700))
https://www.fantasyrp.net/forums/threads/kingdom-of-westholm-the-faith-of-the-five.2895/

​
​
RAYMOND ACADEMY
“ Raymond Academy, founded by Headmistress Lady Tasia de Blackford, has sought out these instructors in hopes of providing opportunities of scholarship and training for Enarion’s ambitious populace, wherever they may come from. The academy values integrity, commitment, and honor not only within the school’s activities, but as a mantra for all to follow and uphold. Westholm’s hub of education is in need of several instructors for the following courses; Horseback Riding and Magic. The Jousting Team is also in need of a coach to ensure they are in their prime.”
Seek out Headmistress Tasia de Blackford if the positions interest you.
​
(OOC: Message Cubicitas for more information.)
https://www.fantasyrp.net/forums/threads/raymond-academy-westholms-educational-hub.2925/

WESTHOLM CLINIC & APOTHECARY
“The people of Westholm shall forevermore be in the epicenter for a robust and hearty people. Westholm’s Clinic and Apothecary is to serve as an institution of healing and research, providing opportunities for growth, medicinal education, and the purchasing of herbal remedies. Along with the clinical aspects, there is a shopkeeper to sell the herbs with their remedies one might require, along with other medical kits and an alchemy laboratory.While the clinic is currently headed by Saoirse de Retford, we are currently in search of new physicians, herbalists, and alchemists to take part in the institution. The Westholm Clinic and Apothecary is happy to take on apprentices who wish to practice the sciences of medicine and alchemy.”
Seek out Saoirse de Retford if you would like to become a physician.
​
(OOC: Message DumbBlondeElf or emmanatalyia#9520 for more info)
https://www.fantasyrp.net/forums/threads/westholm-clinic-apothecary.2172/

POST OFFICE
“A calling to all couriers and mailers across the realm of Enarion, the Post Office is looking for couriers to deliver letters and packages around to different nations and peoples. The job of the couriers is to ensure that the outgoing mail reaches its required destination efficiently and without damage. Applicants to the courier position shall be interviewed by Octavian.”
Seek out Octavian for an interview.

(OOC: Message Antiman111 or Antiman#7193)
ROYAL WAREHOUSE
“The Royal Warehouse has jobs available to those who wish to collect resources for the Kingdom of Westholm. Currently there is an offer of 125 silver per chest of raw lumber and they are also searching for fresh beef, herbs, and fresh fruit. In order to receive a drop-off chest for resources, speak to Saoirse or Romund de Retford to be set up.”
Seek out Saoirse or Romund for jobs!
​
(OOC: Message DumbBlondeElf [emmanatalyia#9520] or Anderssn [Patu#4093].)
https://i.badlion.net/o78w3Mjp6AC8EWs7LkgHyV.png

ROYAL OFFICE OF FOREIGN AFFAIRS
“At the center of every successful nation is strong diplomatic skills of the emissaries. The responsibility of the emissaries is to assist in diplomatic relations growing and improving between Westholm and other nations. The emissaries are responsible for ensuring the government officials remain knowledgeable and aware of other cultures customs and procedures before meetings, along with going with those sent to create pacts and other agreements that affect the realm as a whole.”
Seek out Saoirse de Retford or Klaus Monroe for more information!

Ingvar Winterskorn slowly observes - before deciding to become a mail man! So, he rushes to the post office - adorning his post-man-pat uniform, and delivering letters to people, usually smacking it on their face.
You must log in or register to reply here.
Share:
Link