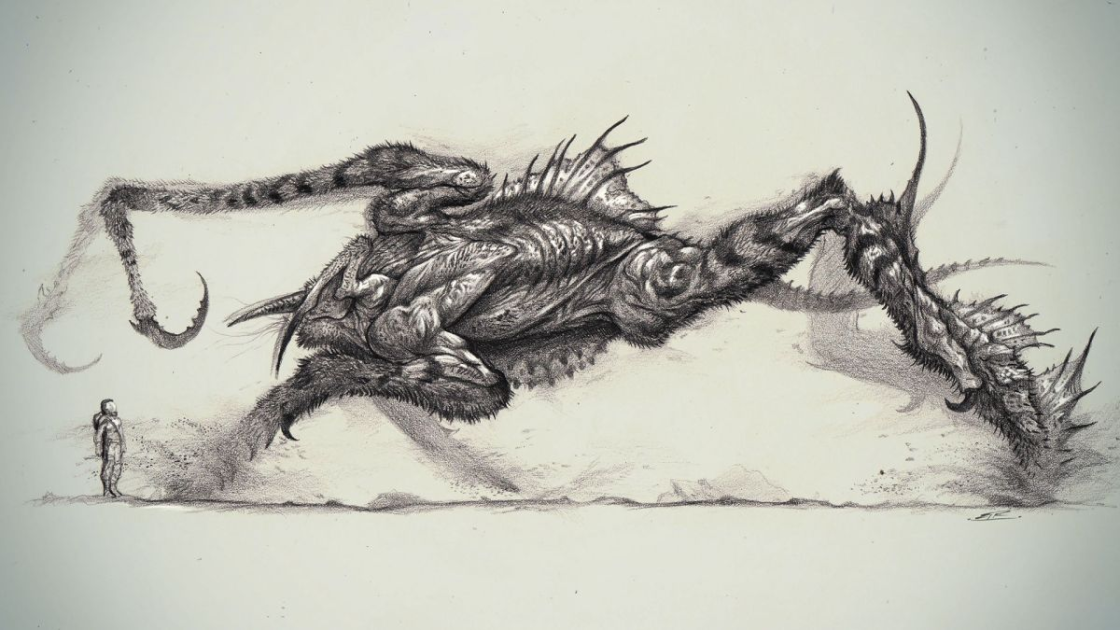 Imagine Source: https://www.creativebloq.com/how-to/16-ways-to-draw-better-creatures
Name:
Otiile Vai (Meaning “Death by water” in Samoan)​
Physical Description:
The Otiile Vai is a Freshwater creature weighing around 6,600Ibs. That’s 3x the weight of the strongest horses! In which their size is comparable to the height of a Mammoth and the width of a small house. Three frog-like limbs peer out from the front and back of these creatures. A spider-like fur coats the legs, face, and underbelly of this creature. Two bug-like antenna’s peer out from where a nose should be. Two gaping holes where the eyes should be to give way to an eye the size of a man’s fist, though they are glazed with a white cast. The dorsal fins of fish are seen throughout the body of these creatures, growing in no specific place, though they are often seen on the back and legs.

Life Expectancy:
The life expectancy of an Otiile Vai is currently unclear. Most members of their species die before the age of 80 due to the constant need to fight and hunt. Though past reports show that the oldest ever recorded Otiile Vai lived all the way up to 125 years.

Preferred Environment:
The Otiile Vai can often be found within Freshwater swamps from alongside large rivers or lakes. They are critically dependent upon these rainwaters and seasonal floodings to survive, as these creatures while they live in murky swamp waters, can only breathe within freshwater bodies. Therefore the cycle of rain and floodings helps to maintain these natural water level functions. They are rarely found on land, however occasionally will be drawn out to hunt for prey.

Behavior:
Hostile. These creatures aren’t even considered “Kill on sight”. Instead, they would be considered “They will kill you on sight.”. Their daily lives consist of the hunting of prey. Anything from Crocodiles to Elks who stop by the waters for a drink. They go through a cycle of Sleeping, hunting, and feasting. No more no less, once they have devoured something they will take a thirty-minute rest. They use this period of time to strengthen themselves. How does this work? Well, the Otiile Vai is known for its Extremely thick Frog-like skin. The older and stronger the Otiile Vai, the thicker the skin they will have. Upon their hunt, they will swim around the banks of lakes, rivers, and even swamps. Once they have spotted their prey they will poke out different parts of their bodies that contain the mimics of dorsal fins. They do this often times to act like a school of fish, either to draw in Hunting animals like wolves or to keep their stealth. Upon getting close enough the Otiile Vai will use its three legs to jump out of the water in a diagonal, in attempts to hook their prey with their Right “Arm” into the water. If unsuccessful they will swim off and try to do the same thing with another creature. However….If successful they will drag the hooked creature into a nearby ocean cave. In which they will begin to feast on the skin of the creature. Yes, you read that right. The skin, they do not feast on the blood nor meat of a creature, Instead, they will feast on the skin. After consuming just the skin of a creature the Otiile Vai will drag the left-overs to the open water body. Letting it float atop of the water as almost an…” Offering”. This is how the Otiile Vai live in Mutualism with creatures that could have been a possible threat to the Otiile Vai, they also do this to keep fellow Otiile Vai from consuming each other, though sometimes these efforts don’t work, as they have been known to consume other Otiile Vai. Lastly, after dragging their leftovers to the open water they will dig themselves under the sandy banks of the water or an underwater grassy patch and take a thirty-minute slumber. Then they will restart their cycle.

Combat Abilities:
The Otiile Vai when hunting has been observed to have extremely powerful legs. This allows them to jump out of the water and attack their prey, this also allows them to swim at a decent speed within the water. They are also able to hook in multiple ways. When on land they are able to “hook” their arm into the dirt while they lift their back “leg” up in the air, in an attempt to “kick” away possible threats. However when in the water they will swing their hooked arm in an attempt to drag threats and pray out of the water in an attempt to kill them from lack of water. These creatures are also known to have….a poisonous hook. Much like a scorpion. However, the poison they hold is never used when hunting, only in situations in which they are being attacked by larger or more threatening creatures, hooking the creatures and injecting them with this poison. This poison does not affect the body the same way a typical poison does, instead, it infects your ability to breathe air. The only known remedy is to consume gillyweed and sit within a body of water, by the time this gillyweed expires its use, the effects of the poison should typically be over (though it depends on the strength and age of the Otiile Vai). Lastly, the most important tip for survival against these creatures, if you are to encounter one, is to keep silent. As they are born blind, though in order to counter this they have extremely good hearing.

Weaknesses:
Due to only having three limbs these creatures are known to be very slow on land and unagile. Often times when swimming at faster speeds they will plow themselves into rocks and other creatures, which can oftentimes cause a fight. Not to mention they are Ironically weak to not only their own poison but the poison of herbs. The only other known weakness is that they are blind, if they cannot see you, and cannot hear your movements due to large and chaotic noises, they will be unable to track your movements to “hook you in to your death”.

Useful Materials:
Useful materials that can be harvested off of these creatures are their poison stingers. They carry a sack of poison that has the ability to take the air out of someone’s lungs. Another useful material from these creatures is their many layers of frog-like skin. These layers are known to be extremely thick, providing their own stretchy armor. Though these layers of skin seem to dry out extremely fast when not in water.

Extra Facts:
The name comes from the language of Samoan, in which the words: “Oti i le vai” means death by water.

Shaneo
Ayo this Everardan culture tho?
Yesterday at 5:23 PM •••

Lionbileti
Everardan culture be lit tho
Yesterday at 11:56 AM •••
M
Malaise

Everardan Culture: The Peoples of the Sun

THE CULTURE OF THE EVERARDAN PEOPLES The...