Enarion, a land brimming with stories and legends. Chief of these are the age-old curses that strike fear into the hearts of those who hear. Of the abundance of curses that plague the land, few are more feared or ancient than Lycanthropy. Though the nature of the curse of Lycanthropy is more in line with being a disease by definition, its origins are believed to be arcane in nature.​
Basics and "The Trials"
The common name for the process of the transmission of Lycanthropy is referred to as, "The Trial(s)", and the specifics involved are clouded in mystery. This term originates from tribal groups that viewed the transmission of this disease as a sacramental ritual, and while there is an abundance of variation, there remain a handful of constants to the process. It always involves one who is already a Lycan of some breed, a singular victim, and the transfer of blood. The newly turned Lycan takes the form of the same beast as the individual who turned them, however as the blood is passed down over time, the turning is weakened by each subsequent transmission.

THERE IS AN ADDITIONAL GUIDE REGARDING THE SPECIFIC PROCESS FOR TRANSMITTING THE CURSE ONTO ANOTHER: This will be sent to LT separately, as it pertains information that if approved, would be at-risk of metagaming.


Forms of Lycanthropy
Upon being turned, Lycans have widely varied descriptions of their alternate forms. The constants to their transformation are that they do not fully transform into an animal, rather, they take on a humanoid form of the creature in question. In their normal forms, they tend to begin growing thicker and longer hair across their chests, eyebrows, heads, and backs. As such, they require regular grooming in order to avoid obvious detection.

There are likely more, however, these are the only known forms that have been encountered in the world.

Transformations
Aside from the Lycan themselves transforming into their hybrid forms at-will, in order to trigger a Lycan transformation, the Lycan has to experience either extreme forms of sensory stimuli, extreme degrees of pain in their normal form. This can take the form of a sly dagger into their hide, loud bells clambering around the figure, or the irritation of their sense of smell or taste.

When transforming, the variations of Lycan are as follows: 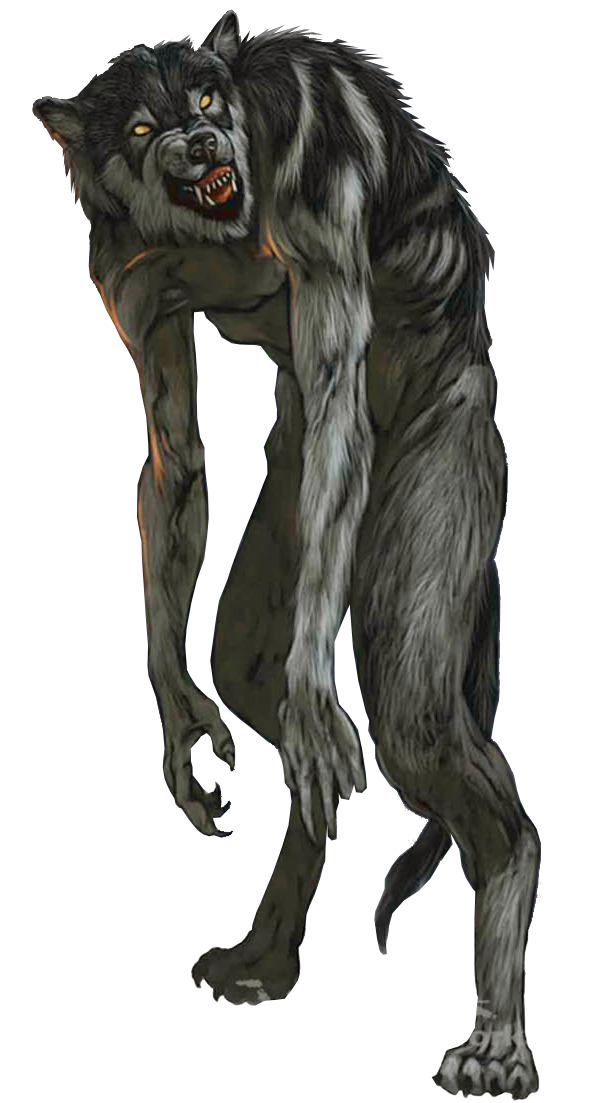 Average Height: (Normal Form * 1.5), for instance if your character is 6 feet tall, your Lycan form would be 9 feet.
Color: Typically appearing with fur shades of brown, black, white, and grey, werewolves have muted tones for their fur.
Traits: Werewolves are marked by their long snouts, powerful jaws, and muscular legs. They are a streamlined combination of strength, ferocity, and speed which renders them to be incredibly dangerous for any one person to encounter. 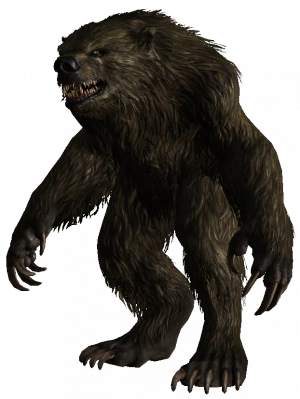 Average Height: (Normal Form Height * 1.7), so if your character is 6 feet, when transformed they will be just over 10 feet tall.
Colors: Marked by the earthy tones of their fur, werebear fur tends to come in shades of brown, black, khaki, and occasionally a dark and earthy shade of green.
Traits: Significantly taller and weighing far more than the other werebeasts, werebears are by far the strongest. Capable of lifting entire horses off the ground, these beasts are fearsome, however slow. Typically these are the most passive of the Lycans, as they are one of the few variations that prefers to consume vegetation in place of meat. 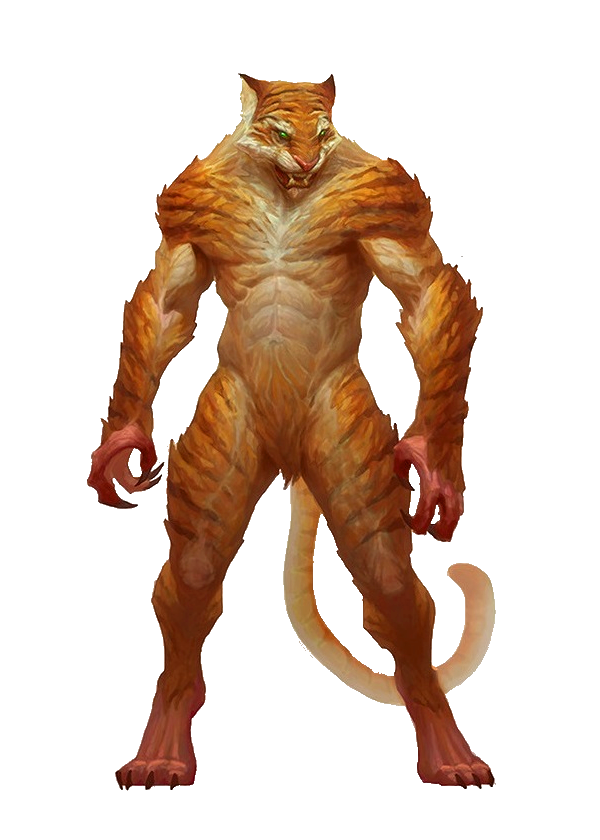 Average Height: (Normal Height * 1.5), so if your character is 6 feet, when transformed they will be 9 feet tall.
Colors: Weretiger fur typically comes in a far more colorful series of hues than other Lycanthropes. Shades of orange, red, black, white, or grey are incredibly common among this variation.
Traits: As the feline counterpart to the werewolf, the weretigers are similar in that they are easily irritated and triggered into their hybrid forms. They primarily feed off of meat and animals, however weretigers are incredibly rare outside of plains and extremely warm climates. 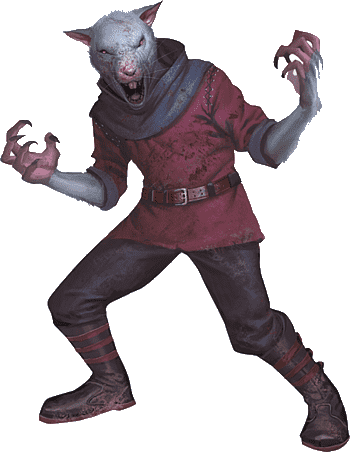 Average Height: (Normal Height) As the wererats stem from fairly small creatures, the normal and hybrid form for this variation of werebeast possess the same height.
Colors: Typically, wererats come in variations of white, black, brown, and grey.
Traits: Wererats are best noted for their speed, and sensitivity to bright lights. The normal form of these Lycans tend to be pale following the reception of the curse, and their hybrid forms are incredibly sensitive to visual stimuli. While incredibly weak, the wererats make up for their lack of brute force with blinding speed. Being known to outrun all of the other Lycanthropes if needed, they are the most agile, and most effective Lycans within urban environments. Additionally, wererats are better at composing themselves than their counterparts when it comes to extreme sensory triggers. Average Height: (Normal Height * 1.34) Wereboars are shorter than most of the other Lycans variations, as if a person who was 6 feet tall became one, their hybrid form would be 8 feet tall.
Colors: Wereboars have shades of fur which are typically brown, black, grey, and in some cases a light tan.
Traits: Wereboars are far stockier than their counterparts, with strength a bit weaker than the werebears, their bovine legs render their agility a problem. Wereboars are incredible at navigating slopes due to their feet, and when fighting, have a tendency to charge at their victims with their tusks raised aloft. Wereboars, while vegetarians typically, are easily irritated and extraordinarily hostile to strangers and potential threats while in their hybrid form.

Behavior:
In their transformed forms, Lycans run the risk of losing complete control over their actions. Newly-turned Lycans have no control over their abilities, however, those with decades of experience have been known to be capable of speech and higher functioning abilities in their bestial forms.

Bloodlust Rolls
An optional rule for ET: When transforming as a Lycan, roll 1d100 to determine if your character loses complete control, or is capable of basic decision-making skills:

0-20: Your character loses all sense of critical thinking and basic decision making; they are acting purely on animal instinct.
20-50: Your character has sudden bursts of animalistic rage, whenever there is an irritant or a trigger (Strong smells, attacks, etc.) your Lycan may lash out in a fit of blind bloodlust.
50-89: Your character has a pretty standard degree of control, nothing major as a detriment; it's a standard transformation.
90-100: Your character has heightened senses and advantage on its defensive capabilities for three rounds of combat.

Combat Abilities:
In their bestial forms, Lycans have a series of incredibly powerful traits as follows:

- Heightened Senses - Regardless of whether or not the Lycan is in its normal or bestial form, the beast has heightened senses and sensitivity towards certain sensory stimuli. These include sound, smell, taste, and sight. In addition, all Lycans are capable of a degree of darkvision (they can see in the dark).

(Example of a Lycan's perspective when their Darkvision ability takes effect)
​
- Improved Strength: In their bestial form, a Lycan's strength improves. The degree to which this adjustment occurs varies depending on the breed. This additionally empowers physical movement and certain features such as their ability to jump.
In order, this is the ranking of strength each variation of Lycan has from weakest to strongest: Wererats, Werewolves/Weretigers, Wereboars, and lastly, Werebears.

- Improved Speed: When a Lycan enters its bestial form, in conjunction with the increase in strength, these beasts also experience a notable increase in terms of the speed at which they can move.
In order, this is the ranking of speed each variation of Lycan has from slowest to fastest: Werebears, Wereboars, Werewolves/Weretigers, and Wererats.

- Resilient Hide: In their bestial form, a Lycan's hide is incredibly strong, giving it resistance equivalent to five layers of boiled leather against any weapons that are not silver, or mithril.

- Beast's Claws: Across the board, Lycans feature incredibly powerful claws on-par with even the sharpest steel. Combined with their strength, these alone are reason enough to be terrified of these beasts.

Weaknesses:
Due to the fact, their curse is magical in nature, Lycans are incredibly vulnerable to Cold Iron and Mithril. So much so that if a Cold Iron blade pierces a Lycan’s hide, their body will immediately combust into a slew of purple flames which are cold to the touch, and slowly shrivel into a decrepit carcass.

Mithril is capable of piercing their hide with relative ease, no more difficult than it would be to cut down a beast of similar size, however, normal weapons will be blunted or simply driven off the Lycan unless wielded with incredible amounts of power.

Furthermore, extreme and unexpected sensory overload will cause a Lycan to retreat or flee. This can be done with extreme smells, incredibly loud sounds, etc.

Wolfsbane, though known throughout Enarion by a different name, is incredibly poisonous to most beings within Enarion. However, its name descends from a myth regarding factions of old which fought and hunted these beasts. Ancient texts and art illustrates what appears to be the burning of wolfsbane before Lycans. This in turn triggers an effect where, if in their beast form, they will revert back to normal.

Useful Materials:
Upon being killed, a Lycan’s hide can be salvaged to provide incredibly durable armor. However, due to its being detached from the original magical creature involved, it loses a significant amount of its resistance to non-magical equipment. On-par in terms of power with triple-layered boiled leather. The quality and strength of the hides are identical across the variations of Lycans, however, the fur length and color varies between them.

Edit: Updated the impact of Cold Iron, added an additional weakness regarding the burning of wolfsbane, and added specific details for each of the known variations.

Ayyy this is really good :))

You can tell that A LOT of time and effort went into creating, balancing, and writing this post. Major props to OP and I hope to see this added in!
OP

_Tepes said:
You can tell that A LOT of time and effort went into creating, balancing, and writing this post. Major props to OP and I hope to see this added in!
Click to expand...

I have a question, though it might've been written there and I missed it but... What would happen to their outfit if they transform? Does it gets torn into pieces or they still retain its appearance when shifting back to their original form?

I have a question, though it might've been written there and I missed it but... What would happen to their outfit if they transform? Does it gets torn into pieces or they still retain its appearance when shifting back to their original form?

I intentionally left that vague so it's up to the individual to rp how they're comfortable. It should go without saying but server rules would still apply regardless of if they have clothes or not; nothing graphic in terms of description.