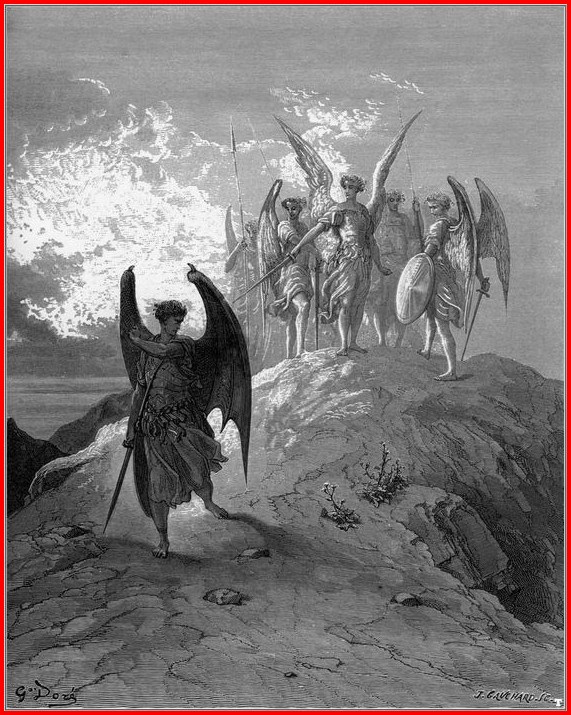 ORIGIN
The Light of Mytra

“We who believe not in GOD, fall to the unrighteous path of the Devil.” ​
- Seer Julius of Mytra​

Devils are known as perfected artisans; they are the ideal traders -- or contractors in this case. Though no true origin is known about their fiendish quiddity, devils [referred to as Akuma] are a subtype of the typical oni variant. They are able to transpose and morph into other existences, so their clear inception is unfamiliar; by the will of GOD and the sun of Mytra, they are considered to be abominations raised by some otherworldly, non-ephemeral plane of hellfire. In most cases, devils are conceived as omnipotent in their ability to make contracts; in history’s calling, not one contract has ever left mortals to chagrin. Of course, only Mytra is all-powerful, so this theory is discarded. It is unclear on how to summon a devil, howbeit is assumed through accursed grimoires, sacrificial rituals, feasts or being a significant individual with some value to the devil -- if it meets their needs, they will snatch at the first opportunity for it.​
The first noted sighting of devils was during the reign of King Dale I of Rheynland. Suppressed by the scorching weight of beaming sunlight, the horizons of Mytra washed away his temptation once, as described by an oracle of the Five Divines, at the sudden egregious appearance of a large, horned creature with ashen scales exhuming gouts of smouldering flames. ​
Unlike that of undead scourges, these metaphysical creatures of ethereal power seem to lament no harsh effect to silver nor fire, as attempted by prior unwilling servants of Devils. They have their own ludicrous ideals, though one thing is for certain: the material plane holds little value to them, hence why deals affording trades between mortal trinkets do not garner as many favours. Devils lust over that of servitude; to bind them as one - master and servant. Mortals are canonically famous for being used as tools to eldritch horrors, they are the perfect soldiers; dismissible and easily manipulated through offers of powerful mortal weapons and the likes of immortality.​ 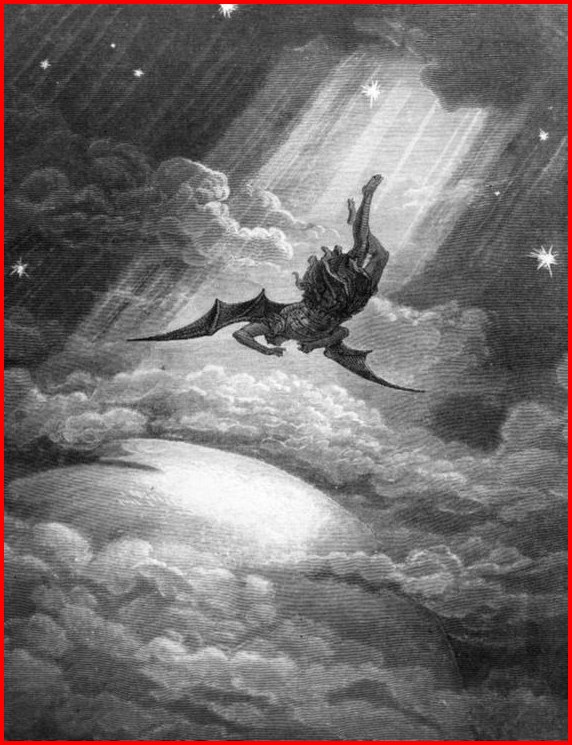 [Credit to gustav doré's illustrations of milton's paradise lost]
PHYSICAL DESCRIPTION
The Devil Incarnate ​
Devils are considered efficacious in their duty of manipulation; those who befall the appearance of an Akuma fall prey to their machinations. Due to the inherent nature of a devil, we are unaware of ‘what they look like in actuality’. By the will of MYTRA and all that is blessed, all current sighted devils seem to have physical characteristics that are reminiscent of any other (we are unsure if only one powerful devil exists that chooses to change appearance and identity, or if there are several).​
They appear with large bat-like tendrils expanding out from their spines -- wings of scorching red that hold sharp teeth-like spikes at the very top (near the lesser coverts). Usually, scales of different colour variants scatter across their form: red, black, orange, gold, or silver. It is assumed gold and silver is used to lure their victims who obsess over treasure, though they do not seem to hide their demonic, ill-trusting image for some reason. ​
No size can be confirmed at this given time, by the flames of Mytra do we hope they are not able to reach our paradise; the SUN must be protected from fiends.​ 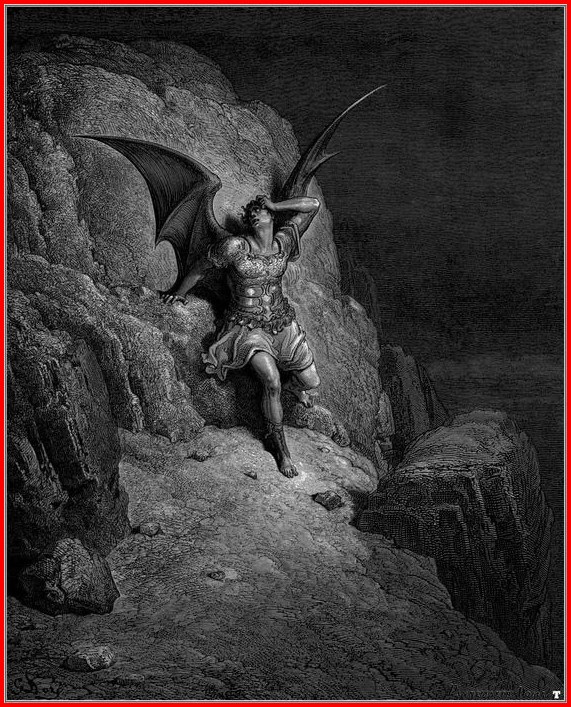 [Credit to gustav doré's illustrations of milton's paradise lost]
CONTRACTS
To Fall Prey ​
The definition of contracts refers to an agreement between two organised parties, ending with some sort of bind to ensure it is not breached. Unlike that of oni, devils seem to host immaculate amounts of knowledge and vast immortal intelligence that far surpasses mortals, though they do not share the same soul nor have the same desire as us ephemeral of mankind. ​
Contracts have no practical range in their variety, though it also leads back to equal exchange. A devil will do as they will be given. In this case, the possibilities seem endless. Of course, nothing that transcends those of the divine could ever be touched by the likes of a devil (this is yet to be confirmed, but naturally assumed by us faithful).​
꙰ Contracts must be logical and approved by that of the lore-team, likely under the consultation of the standing lore-administrator.​
꙰ Contracts must have some sort of equal exchange. If the contract is not fulfilled if set by a time-basis, it should lead to a Permanent Death (PK) of said failed contractor. ​
꙰ Contracts will be discussed in-roleplay and panned over out-of-character to ensure they are strictly appropriate. (For example, if a contract is simple and seems to be insistent on something small for a smaller exchange, it will be strictly dealt in roleplay. However, if something of a higher magnitude is to be exchanged, it will grant an overview from the lore-team member out-of-character for further discussion).​
꙰ Devils are free to counter-offer should the exchange not be enough in their eyes. Please try not to dismiss players if their offer is not up to par, it ruins the development of roleplay and their opportunity. ​
​ 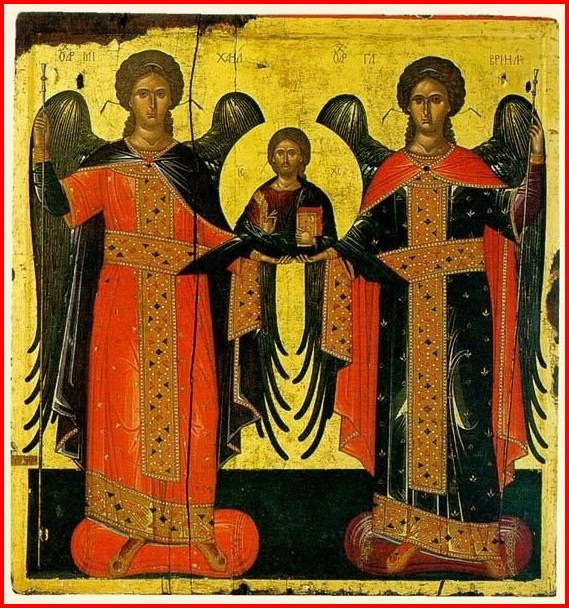 To those faithful of the Five Divines, find power and will in the likes of Mytra. Do not fall to the temptation of Jihn and Devil.

You who are willing, to see light in the glories of His willing sunlight. Please find solitude in your mortal lives, for He will reward you with life eternal in paradise.

That of water and wine, or even immortality -- these are but false lies of the accursed ethereal. Find joy in the SUN and all shall precede well.
​
This is an ancient scripture written by some faithful servant of Mytra who dwelled with contract-making for research, an unholy sacrifice in order to gain information. All redlines (i.e highlighted in bullet-points) are for lore-team overview and should be avoided, whilst everything else is considered lore-text to be used for anyone else's knowledge should they come across it. ​
Lore on this page should not be seen as accurate and is depicted from a roleplay perspective.​
- Werew0lf. ​
​

Swifty
Roses are red,
My favourite food is a burger,
Elves are dead,
Because of a Jindle murder!
48 minutes ago 2 replies