Book | The Way of Current | 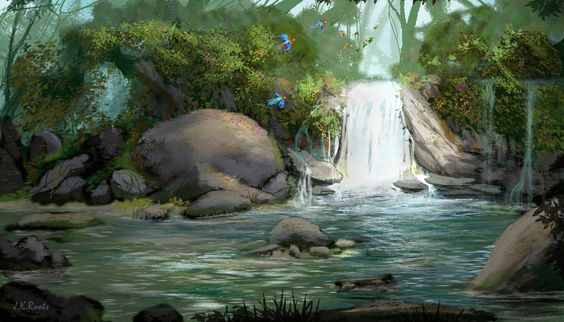 The Way of Current
Penned by Aerenia Valimor​
The Way of the Current teaches that even during the most raging of storms, one is able to find peace in the fact that from the rain beating down from the sky above, it will fuel the life around us. It is the water that heals, that guides, that nurtures, however, the water is capable of eroding away canyons, of creating a sweeping tide that is able to annihilate a settlement along the beach, a force that can both create and destroy that should not be underestimated due to it’s inherently tranquil origins. The Water Sect welcomes all to learn how to control their emotions and go with the flow of water so to speak. ​
-=o=-​
Chapter I: The Divine ​
Estuaries, those officially inducted into the Way of the Current, follow the teachings of the Goddess Mayi’Ariel, most commonly referred to as Mayir. It is she who gives us our corporeal forms as amble hosts to her most blessed creations, our souls. The winding river that is life being a conduit to guide those who follow her into eternal realm. The Goddess had created water as fuel for her creations of life, allowing it to flow through us in every way.​
-=o=-​
Chapter II: Organization​
The Way of the Current is categorized by a hierarchy responsible for passing on their teachings to one another. This ensures that one is able to become more one with themselves and have a better understanding of the Way of the Current as time goes on. When someone joins the Way of the Current, they are referred to as an Initiate after speaking with the Elder or a Tributary. They move on to becoming an official member of the Water Sect and become an Estuary by going through the Ritual of Admittance. After showing enough devotion to Mayir, an Estuary may become a Tributary after completing the Ritual of Advancement. The Elder is the one who acts as a conduit of Mayi’Ariel, it is their responsibility to look after the Way of the Current and guide Mayir’s followers. ​
-=o=-​
Chapter III: Culture ​
The Way of the Current is a way of life, a way of living, a way of being. Most of the Water Sect are often considered laid back and relaxed people, learning to manage and control their stress so they often seem level-headed. This attitude and poise is attributed to their philosophies of how they live their lives. During important rituals and events, those of the Way of the Current are seen donning hues of blue and white in their attire for reverence to Mayir. Estuaries are responsible in the Kingdom of Aellen with upkeeping stewardary as it is their duty to ensure the Kingdom is teeming with life. To go along with that responsibility, they are responsible for hosting a variety of feasts and festivals for the citizens enjoyment, giving back to the people yet not requiring anything in return. ​
-=o=-​
Chapter IV: Philosophies​
Those that follow the Way of the Current are known for their wisdom and being philosophical people. The main philosophy of the Water Sect is to go with the flow of things, akin to water itself. There is a reason for everything that happens and to fight against the trials of life rather than go with them is only hindering how you may learn to adapt to situations and what you are able to learn from it. Followers of the Way of the Current do not worship water itself, but the Goddess who uses water as a conduit for giving everything life. Estuaries believe the philosophy of life being like a river important to them, it is the idea that nothing is permanent, things come and go, you meet up with other rivers before departing, and it is about the experience rather than the outcome of life. ​
-=o=-​
Chapter V: Rituals​
The Way of the Current hosts a variety of rituals and trials for various points of one's life, daily living, and to show devotion to the Mayir. Without these rituals, the Way of the Current would not be able to function properly and revere Mayi’Ariel as she should be revered. The Rites of Passage encompass the Ritual of Admittance and the Ritual of Advancement, both used to elevate someone in the hierarchy of the Water Sect. The Rites of Life dictate the way wedding ceremonies operate. The Rites of Life also show what happens during funerals with the Ritual of Passing. The most important rituals are the ones made in reverence to Mayi’Ariel, the Observance of Purity which happens once a year and is conducted by the Elder and meditation rituals that can be done at any time by any follower of the Way of the Current. ​
==========================================================================

[!] This book could be found in various libraries around Enarion.
​
F

Elathion would smile brightly as the book was published, being quite proud!

Aien Raloris would attempt to get a copy to place within the Tor Ascara Library!
You must log in or register to reply here.
Share:
Link