Here comes a quick bit found and reformated for FRP that aims to provide some mundane and low-fantasy worldbuilding to some of the more 'normal' aspects of roleplay life. Ideally, this should need no monitoring at all and simply provide some added Smith roleplay.

“And by the heat of the fire, I found him, swinging his hammer with such haste and vigor I thought it miraculous. Verily, he smithed at incredibly high speed.” -The Beastsmith’s Arsenal, Vol I., Foreword

All but forgotten are the Beast-Smiths of the First Age, their ironworks masked beneath the heavy and old layers of secrets and ash from the burning of each previous era. Steel and hearth and flame are not things easily buried, though, and so it was inevitable that their work would resurface elsewhere. While some say it was dwarves that developed this means of Forging, others say it was the Dark elves, though the true answer is lost.
The True answer lies far over the seas and further past any known plane to the home of the very first Beastsmiths, upon the shores of a land unknown, Any means of reaching this place has long since been lost to the sands of time, but it is a land where monsters and men have a long and bloody history with one another. Deep within the halls of T̵̛̍å̴͘ē̴͗t̶̄̀, in the old forge of the t̶̄̀T̷̯̍̋̓̈̚ẖ̸̼͖̫͔͛͌̒́͂͌́ǎ̷̦̺̝̪̲͎̤̏̃̕̕n̶̢̼͔̻̔̽͌̓̉͝ĩ̴̪̺̙̘̝͉͗́̃̂̑̑́u̴͙̥̺̣̣̬͕̎̑͐͆̓̀̏̀̚͝m̴̯͇̤̩͔̼̹̮͗̎ͅ, an aged smith of the venerated beast-slayers claimed elder knowledge of the forging techniques known to none but he, Yet such is only a legend, all that is known is jotted Down within this almost ancient Text, Dated back to Pre-Calamity

“It was a gorey place, reeking of blood: that odorous, coppery tinge in the air. Blood was kept by the barrelful. But for what?”​
It is known among the Beastsmiths that the blood of monsters has keen properties upon metal when forgeries are quenched within it. The recipe is simple: A barrel must be filled with three parts water and one part blood for an even balance, and so the mixture is still suitable for extinguishing the heat of tempered steel. Over years of experimentation, the effects of different monsters’ lifeblood upon weaponry and armor have been documented and still continues to be learned in turn with the discovery of new creatures...

Draconic Blood --- Sometimes the most difficult to collect, the blood of higher draconic creatures grants a noticeable heat resistance to steel in turn with a ravaging yet internal burning sensation that coats the area of any inflicted wound from quenched weaponry, Should this weapon be coated in any flammable oils and lit ablaze, the wielder would find that it is able to hold higher (1800 celsius) amounts of heat for longer

Zambeeni Blood --- The blood of the Zambeeni grants a very weak poison to quenched steel, though a good bit weaker than the poison that the creature emits, creating an Uncomfortable sensation akin to a tingling rash where wounds might be inflicted
Glowing Ink + Animal blood --- Different from the regular 'Three Parts water, one part blood" mixture, this quenching liquid would require a portion of the quenching fluid be 1/4th's Glowing ink, granting the quenched material a faint yet lustrious sort of glow, though this grants nothing more than an aesthetic improvement shine

Hydra Blood --- Noted as one of the deadliest creatures to date, the blood of this creature, when used to quench serves as an anti healing weapon, Wounds inflicted by a weapon of this sort will not heal, even when one is under the effects of Anodyne essence or Vivfying elixir, though more magical means of healing have been said to work against it.


It must be explicitly noted that any attempt to mix blood with one another to produce layered effects is disastrously corrosive to the metal and will result in a ruined project. 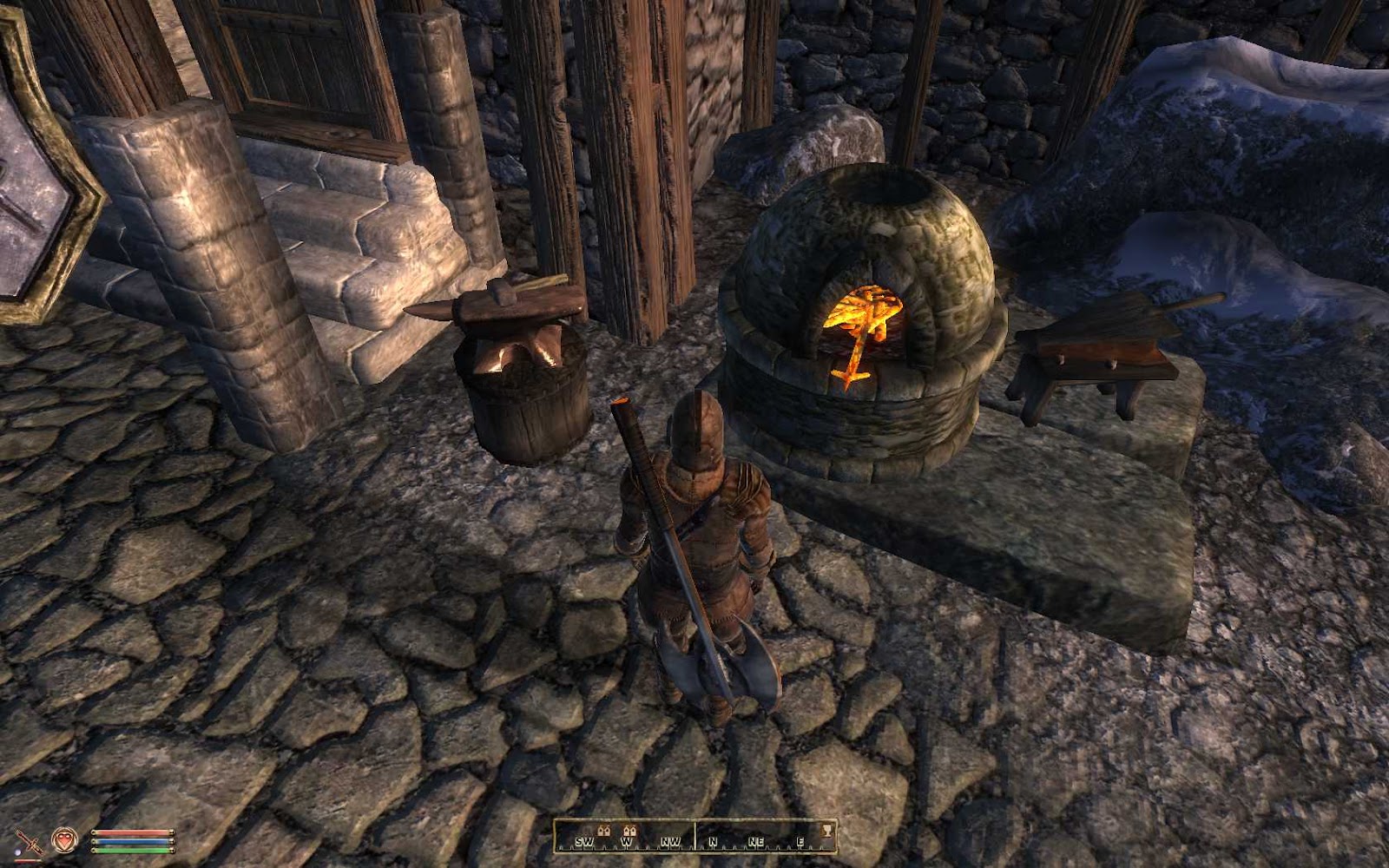 “It was bizarrely religious the way he sat before the melting steel, and yet I myself could not help but marvel at the way the Death Knight’s gauntlet bubbled and oozed into molten liquid. A machine of gore and war, reduced to slag.”


The invention and temperance of various alloys have remained a part of smithing knowledge and practices for centuries, though since the discovery of Mithril and their near-perfect practicality there has not been much ingenuity in the matter of ingots and material used during the forging process. The Beastsmiths, however, through experimentation and the dangerous collection of various parts and trophies, have found a few pseudo-alloys by combining the remains of magical creatures and beings with their ingots during the smelting process. Just like with the techniques outlined in Volume I, mixing these effects proves disastrous for the metal.​
Ossitation --- Not an alloy itself, Ossitation is the use of magical bones (Typically Undead.) of a particular sort by grinding them into a fine powder and dusting the line of the ingot mold before pouring slag. The result is a metal that does not easily chip or dull: while structural damage and the wear and tear of battle will still ebb away at it, the superficial luster will remain pristine, almost idyllically so.

Petrite --- Perhaps the strangest of infusions in the slagging stage, Petrite is a result of the crushed and dusted remains of a Living Statue being added to an ingot while waiting for it Whenever the metal is cool, it takes on a rough, almost stony texture to it and could be mistaken for rock itself though bears no structural improvements or weaknesses in comparison to unaffected metals.

Cite
Alas, reader, you come to the least marvelous of all there is to read in The Beastsmith’s Arsenal. Outlined here is an ever-growing list of materials and techniques with much lesser effects to be used at your leisure and your own ingenuity. Experimentation is encouraged: perhaps you will discover properties and uses I overlooked when scribing this.​
Draconic
Dragonhide/Wyvernhide, when tanned and cured into leather, makes for a sturdy material for grips. Dragonbone/Wyvernbone, while being dense and difficult to shape, rewards effort at chipping and carving it over a long time: It bears surprising flexibility, as well as a natural resistance to heat.
Jotun Bones
With bodies the size of several grown men on average The bones of those otherwise known as Giants are thick and dense, Making them rather perfect bludgeons and when made into weapons, they can sometimes be on par with iron.

Undead
Ghoulhide or the rotting skin of any undead being has proven entirely impractical and its use is not advised, however, book covers can often be made of this material

Monsters
While the bestiary of known monsters in the world is far too vast to cover and detail the uses of all their bodies, let it be known that monster hide is a durable and suitable replacement for regular tanned leather in just about any situation. Utilize different textures and colors to achieve the desired appearance of your weapon’s grip. Monster bones have not proven any better than a regular animal in crafting purposes. The strung innards and hairs of monsters have also seen prolific use as bowstrings...
Last edited: Oct 17, 2020
OP

So, after reading over this. i must say it is quite the post, i do like the idea of all of the special ways that blood enacts each item, but i cant tell if this is supposed to be smithing lore or magic lore, also you did not mention how you would obtain all of the bloods needed in order to forge. you also did not give a reason for why and how the certain bloods gave that effect. right now. i suggest waiting a little while before submitting this again, just because some of the FRP lore needs updating, but i do appreciate the submission!

I like some of the ideas here. However, my feedback is that when we write bestiary entries for different creatures we specifically include a section for "useful materials." Rather than beastsmithing being its own lore entry, we can simply include ideas for how to use blood or remains of magical creatures for smithing techniques on the bestiary entry itself. This will be put on pending while we incorporate the ideas that make sense into the bestiary posts.
You must log in or register to reply here.
Share:
Link

KyM28
can i apply for a flower crown. that's all i really want
5 minutes ago •••