A RETURN TO DUST [PK]

A Return to Dust 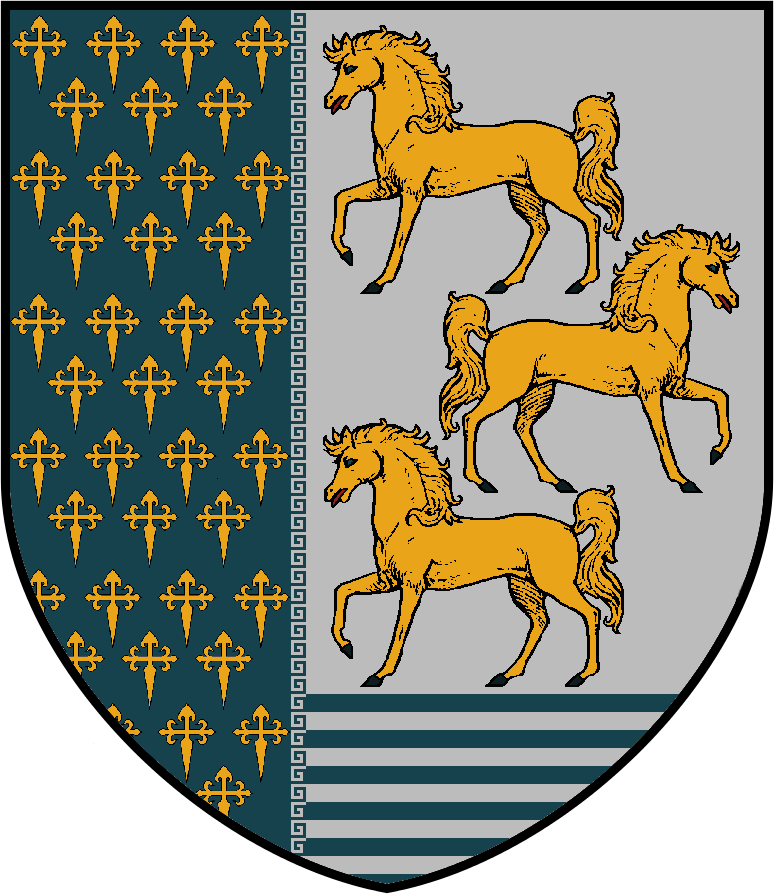 The House of Myrfeld has long been loyal servants to the realms of Man and the Holy Mother, within the Kingdom of Calendale, as well as its predecessors of both Rheynland and Westholm. The House of Myrfeld has found its roots in leadership in every iteration, from afamed Marshals, to Knight-Paramounts, and at last, the bearers of the crown. The House Myrfeld has preserved the western lands with peace and prosperity and has brought the sword upon those that would threaten it, standing as the longest serving dynasty within all of Enarion. We have served our purpose with diligence, and now the people of Calendale have found their feet.

Henceforth, the House of Myrfeld shall be dissolved. Only those of Eadwulfs, Godrics, or Oswalds line may reinstate the House should the need arise. Our sons and wives have set sail westwards, to refind the lands of Myr. Osgar and Uhtric, sons of Konstantin, may keep the last name Myrfeld, however it shall not be passed onto their children.

It is the wishes of Eadwulf that the Kingdom be reformed into a Holy Dominion, and that a suitable leader be selected by the council, akin to the position of Ealdorman in Barwic.

The battle ensued, and would followed could only be described as a slaughter. Four men of Myrfeld and the venerable Augur Engarant de Corseilles faced all those gathered at the Court, and by the end only one Calendale citizen remained facing the Myrfelds. Owain Rudiger, loyal Knight and levymen to the family, was the only casualty on the side of Myrfeld, having been ripped apart by the mob. After the fighting had ceased, only Jonas remained and he would end the life of Godric of Myrfeld by his own requests. Eadwulf ceased his life to Baranor, beheaded cleanly, and Baranor was quickly set upon by the Mannhardts, Lord Karl ending his life with haste.


Hello. Myself and the other guys (ninjaclimb, twodiks, vurmy, and wolfdwg) are gonna be taking a step back from FRP for now for various reasons, but the memories we've had on this server have been some of the best. Thank you all for your part in them. Would mention some people but there's simply so many. Farewell, and keep this server going for us o7
Last edited: Aug 29, 2021

Anthony Coalman looks upon the missive, a sadness creeping into his body.

"I always wanted to be a Knight...perhaps I can assist the men of Calendale in combat - now that those who protected the Realm so valiantly for many years have perished."

He would then go to his home, 9 Divine Square, to begin studying the arts of combat so he may one day live up to the standard of the Myrfelds. A thought, one starting fairly small but surely it will grow, he wished to avenge them in some way...perhaps rebel against those who had slain the hero's of Rheyn.
Last edited: Aug 31, 2021

“Well fought.”
A certain elfess spoke after reading the missive.​

"Glory to Lord King Jonas, I trust that he shall raise the land even further from the dust. May Allah grant him the best of fortune." The Sheikh proclaimed as he kneeled before the new or perhaps temporary King.

As the battle raged on, five against twenty, the horde of men fell one by one. Succumbed to injuries or dead, only one man stood remaining among his brothers in arms.
"You must kill us, Jonas. For you are the only one to still live. The rest have failed." Godric spoke.
Few words were exchanged between the Knight Paramount and Jonas, before a sudden thrust of his blade took the Myrfeld's life.

"The King is dead. And so are his kin who bravely fought with him until their very end. To some you may be traitors. To fewer, brigands whom knew naught but slaughter. You were Kings, Lords, Heroes of the Western realm. - And you fought the only way you knew how. To win, even in death. The line is broken, and the age of Myrfeld is over. Yet I shall remember you, not as berserkers, but heroes. Men who truly achieved what it means to be called Legend."

Skippy Bronzebeard would hear word of the shifting of power within the west, grumbling and soothing his nerves with a nice mug of ale. "Well, t'is will eithah end gud fer dem western folk, or weh shall see much power grabbin' in de future..." he says, and would then depart for another day of mining.

Baby Bee would stand along the crowd, whether they were helping the wounded and the dead, or praying to Mytra. He managed to live the slaughtering, He knew nothing of the Myrfelds. One thing that will always stay within his heart is when he said to the Myrfelds that he managed to live the slaughtering and one of them, Eadwulf of Myrfeld replied with "No, You are dead."

He paid his respects.

Josh Griffinthorn would spit out his tea once hearing the news What the hell...Rest In Peace... I guess" he said before getting up and walking out.

Respect on your name

An olden, confused wraith howls in laughter at the death of those who've felled their legions. That laughter degenerates into wailing cries, and for that night, the haunt of Castle Gulac is filled with the sobbing and grieving of a harrowingly cruel creature, confused in it's heart and made forgetful of whom was their allied friends - Over and over.

Quietly, they raise a fist at the rising sun, giving a quiet -

Owain laid on the steps leading up to the castle gates after giving enough time for the Myrfelds to retreat back. Fatally sustained multiple wounds, armor smashed or even trampled on by the Calendale men who clashed onwards. Dazed and semi conscious - He only had one thought of mind 'thirst' and retrieved out a bottle of wine, taking a hefty swig before blacking out.

".. Eadwulf?" The man was left unanswered somewhere far from Enarion.

Elnalari Isilros would stand with a bit of shock, hearing of their death from court. She would quickly fix herself though before speaking, "how convenient."

Avi would stare out from the roof of his home at Castle Grimm, the pipe between his lips warm from how long the smoldering herbs had been burnt and his eyes drifting to the stars in the sky. He was watching in wait as if by some miracle something would happen but even then all he saw was the way some would dim or others brighten, "May Enarion grow still..." He said quietly as his throat burned but only as he felt the urge for air did he exhale a smoking breath towards the sky as if to lay a blanket over it to tuck the moon and stars in, "I am sorry I not able to say goodbye..."
Last edited: Sep 2, 2021

Luvwick celebrated quietly, the corrupt noble family has now cease to exist, meaning he will be able to one day have Workerism stand in Calendale, but oddly he felt saddened by the Myrfelds dissolve, he cared for history, and the Myrfelds were that, so even if he hated them, he respected them, so with a simple nod he turned away from the missive and walked away, where? Possibly to continue spreading his Workerism idea.

Michael Imperium spat on the missive "Good riddance, they had ruined my life, Hopefully they suffer for the crimes they've done to me in the beyond." Michael said, walking off to provide for his wife to be.

(OOC: Thank you for the (Sometimes) Good RP!)

Archimedes_B)
Just did a retest in history and raise their grade from 50% to 70%, feeling good!
Yesterday at 6:31 PM 1 replies

Sukitoru
you will never get to hear an orc drum solo
Yesterday at 5:47 PM 3 replies